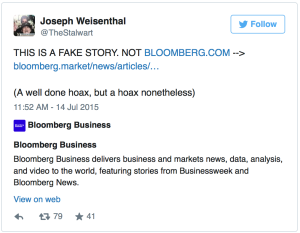 Yesterday, a website that looked exactly like Bloomberg posted “news” that there was a $31 billion buyout offer for Twitter. Ummm not true! The website, called http://www.bloomberg.market, featuring a new gTLD, was fake. And so was the report. The fake website was a near-identical replica of Bloomberg’s site, and even used Bloomberg reporter Stephen Morris’s byline. OpenOutcrier, a Twitter account that bills itself as a destination for “Real-time stock & option trading headlines, breaking news, rumors and strategy” was the first to post about the report, although Bloomberg employees were quick to point out it was fake.

Most discussions about new gTLDs causing problems for brand owners is preventative such as with the .SUCKS and .PORN domains. This incident is a good example of a new gTLD causing the damage brand owners are trying to prevent in those other cases. As a brand owner you should make sure to not only use these new gTLDs as a tool for branding but remain aware of the release of new gTLDs to proactively register relevant domains and/or monitor for infringement like this. There are a number of free monitoring tools like Google Alerts or Talkwalker that you can use to monitor use of your brand name.  And you can see which new gTLDs have launched and when so you can remain up to date on gTLDs that you should register from a branding perspective and/or from a brand protection perspective.

As a result of this false story, Twitter shares shot up, only to fall back down when Twitter corrected . It’s not clear who was behind the faux story. With all that’s going on with Twitter, including the CEO being replaced by co-founder Jack Dorsey earlier this month, this incident was believable.  This could have caused more damage to company finances, reputation, and consumer trust. Don’t let your brand be next! Fraudsters are very savvy as you can see.

View all posts by Admin